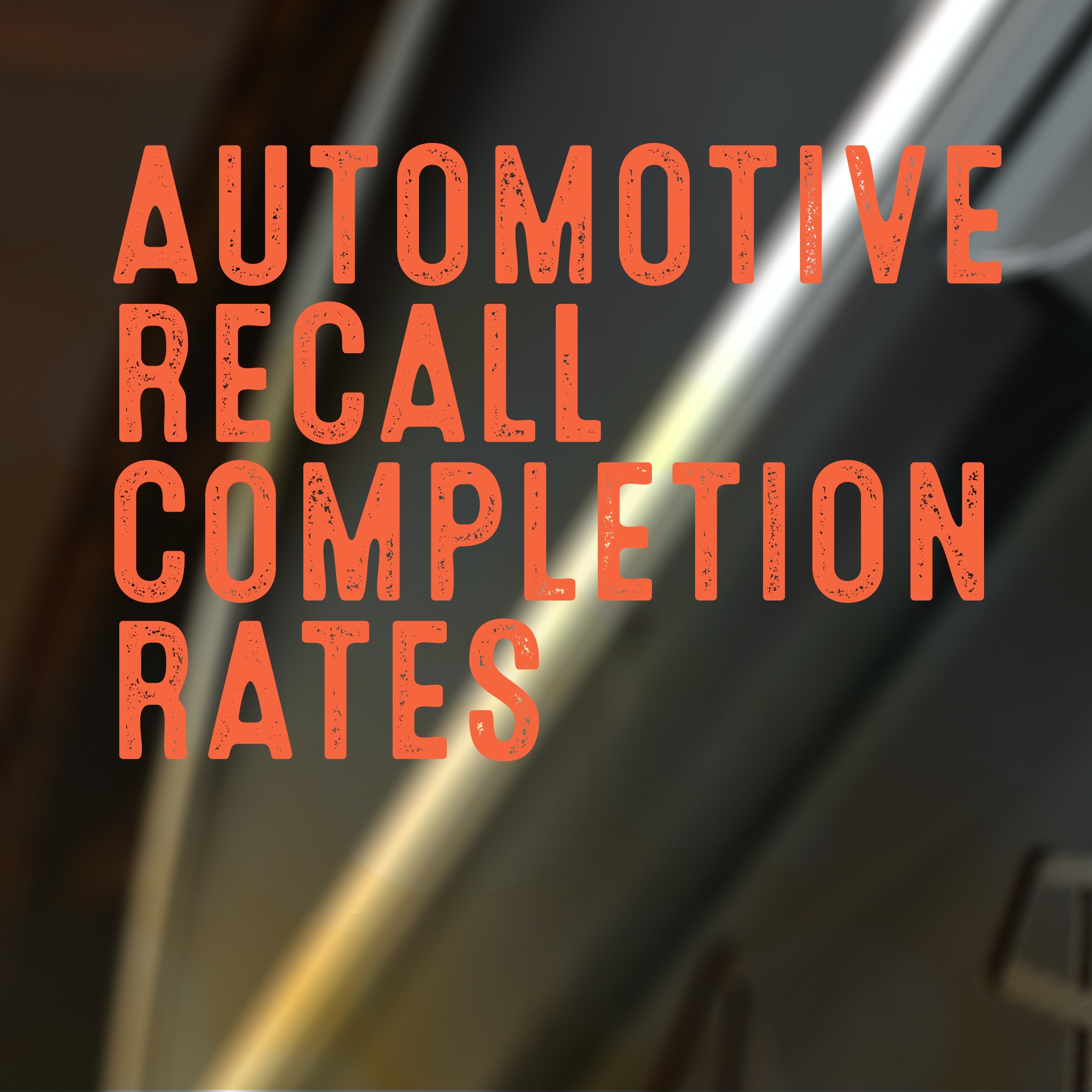 As published in Legal News

Automotive safety recalls have perhaps never been more common After all, today’s vehicles contain more technology and sophisticated parts than ever before and public safety is forever paramount. Yet no significant research has been conducted in the past 15 years to more closely examine determinants of recall completion rates. This is vital information for quantifying potential damages in disputes between OEMs and suppliers, including litigation. The time has come for the industry to take a renewed and reinvigorated look, including the federal government and NHTSA.

By definition, a typical automotive safety recall involves an automotive manufacturer requesting that vehicle owners bring their cars in for service to fix a part deemed a safety issue. The National Highway Traffic Safety Administration (“NHTSA”), the agency created to administer vehicle safety standards, requires that automotive manufacturers report completion rate data on recalls to the agency for six quarters. Of course, with each recall, NHTSA’s goal is a 100% completion rate.

In 1994, academics Hoffer, Pruitt and Reilly examined completion rate data that had been reported to NHTSA by OEMs between 1984 and 1986 and found completion rates higher for newer vehicles manufactured by U.S. automobile manufacturers, and for recalls categorized as having a severe part defect. Rupp and Taylor (2002) studied completion rate data reported to NHTSA from 1980 through 1988 and found the same results, as well as, interestingly enough, that completion rates were higher for recalls publicized in the Wall Street Journal. Both studies found that vehicle age, severity of the recall, and the type of automotive manufacturer (i.e., domestic v. foreign) impacted completion rates.
Here are results of an economic study covering nearly a decade (2006 through 2015) to determine the impact of several variables hypothesized by to affect the completion rate on automotive recalls for domestic original equipment manufacturers (“OEM”s, collectively the “Detroit 3”). Those variables examined were: (1) age of the vehicle at date of owner notification; (2) impact of multiple recalls; (3) consumer’s perceived severity of the recall; and (4) size of the recall campaign. Moreover, rather than grouping OEMs by “domestic” and “foreign” as had past studies, GM, Ford and FCA were closely examined – individually and comparatively.

Automotive suppliers, OEMs, and attorneys should especially take note of the empirical results of this study to assist in establishing the parameters for settlement on automotive recall litigations.

As hypothesized, the latest data shows that vehicle age continues to be a major determinant of recall completion rates with automotive recalls on older vehicles experiencing lower completion rates. This result is not surprising and is intuitive that a consumer would be less likely to get an older vehicle remedied, especially if it is out of warranty. This finding is consistent in significance and magnitude across all OEMs and for the Detroit 3. Looking at a 5-year old GM vehicle subject to a recall, for example, the data shows car would experience a 26% decrease in the completion rate relative to a new vehicle. For Ford, that decrease is 20%; for FCA 27%. – all very similar, demonstrating that consumers all treat the age of their cars with a similar mindset, regardless of the OEM.

Beyond age, however, it is vital to consider other key factors, all of which were closely considered and analyzed in our latest study. They are as follows:

It was also hypothesized that the existence of multiple recalls on a vehicle subject to a new recall positively impacts the completion rate as the consumer may take care of all repairs at one time. As such, we created a binary variable to test this hypothesis. If the vehicle has other existing recalls present during the required six quarters of reporting to NHTSA, then we coded the binary variable as one. Otherwise, the binary variable is coded as zero.

Upon new examination, the existence of multiple recalls does prove to be a determinant of the completion rate with the vehicle owner more apt to get a defective part fixed if the vehicle is subject to multiple recalls – for GM and FCA. However, this was not the case with Ford. The reason for this result is currently unclear.

From vehicle owner notification letters, we created a binary variable to account for the consumer’s perception that a recall is severe. Language in the owner notification letters was searched for key terms that would indicate a perception of a severe consequence of the part defect to the consumer. These terms include: loss of control, fire, loss of braking, loss of steering, stalled vehicle, and remote control of vehicle. These key terms are consistent with prior studies involving recall severity, including Hoffer and Reilly (1983) and Hoffer, Pruitt, and Reilly (1994).

Perceived severity of the failed component is hypothesized to have a positive impact on the completion rate. That is, vehicle owners are expected to get their vehicle fixed when the nature of the recall is perceived severe, as opposed to perceived non-severe, component failures (e.g., seat belts, windshield wipers, etc.).

The new study found, however, that even when a recall is perceived as severe, there is only a 2-6% impact on completion rates across all OEMs. Severity is simply not a motivating factor for consumers today. A big reason for this may well be the amount of recalls that are issued with increasing regularity, creating, in essence, a recall fatigue factor that leads to inaction.

From the NHTSA data obtained the total population of vehicles involved in a recall (after removing scrapped, stolen, or exported vehicles). Size of a recall campaign is also expected to negatively impact completion rates. Larger sized campaigns are expected to produce lower completion rates than smaller sized campaigns because smaller campaigns are targeted to vehicle owners who are more likely to have been impacted by the issue. In a larger campaign, there is a greater probability that the vehicle owner may not have been impacted by the issue and therefore perceive the repair as less of a priority.

The impact of the size of a recall campaign on the completion rate, we found, has mixed results. Consistent with expectations, size of the recall has a negative and significant effect on the completion rate for FCA and Ford recalls. That is, larger sized FCA and Ford campaigns have lower completion rates, which is consistent with the expectation that there is a greater probability that the vehicle owner in a large recall campaign may not have been impacted by the issue and therefore perceive the repair as less of a priority.

However, for GM it was found that the size of the recall campaign positively impacted the completion rate, which is inconsistent with prior findings, suggesting that GM may have more effective, comprehensive and/or compelling communications programs in place to efficiently deal with the unique intricacies of a larger recall campaign, which, in turn, motivates vehicle owners to act.

Beyond this study, factors related to geography should also be examined more closely. To be sure, you are more apt to see part defects where extreme weather conditions are present, including heat, humidity and saltwater exposure.

As this up-to-date economic analysis demonstrates, while age is an important completion rate determinant, there are other key factors that quite often lead to wide variability in predicting automotive recall completions rates. Such factors – and calculations related to them – should and must be considered in order for NHTSA and OEM completion rate expectations to be more accurate and based in fact.

For suppliers, hundreds of millions of dollars are at stake. Consumer safety is imperative. But so is determining completion rates and financial ramifications that are accurate and based in fact.

Automotive suppliers, OEMs, and attorneys should especially take note of the empirical results of this study to assist in establishing the parameters for settlement on automotive recall litigations. Not doing so may prove to be an even more costly endeavor.