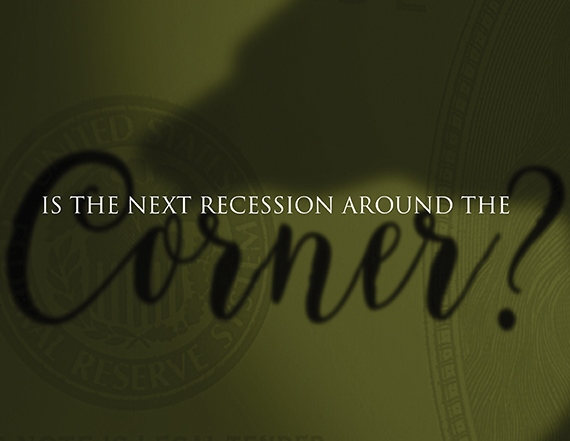 Is the Next Recession Around the Corner?

You may have heard people fretting over the possibility of an inverted yield curve and how this inversion may indicate a coming recession. The yield curve is not a magical crystal ball to see the future. Rather, it represents investor sentiments and expectations. Allow me to explain.

The yield curve represents the relationship between nominal bond yields and maturities. A bond’s yield is the periodic rate of return. Short-term yields are determined by the Federal Reserve. Long-term yields represent investors’ expectations of average short-term yields over that time, plus a premium for any inflationary risks. For example, consider a bond investor who wants to buy a 10-year treasury bond. This investor believes the economy is entering a period of expansion and therefore takes inflation into account. Inflation often occurs during an economic expansion as a result of (among other things) greater money supply from the Federal Reserve and higher wages. These factors result in more dollars trying to buy the same amount of goods and services, causing a rise in prices. As inflation occurs during an expansion, the Federal Reserve increases short term rates to deter borrowing and thereby lowering spending (or money supply).

Back to our investor. In calculating a desirable return (or yield) on their 10-year bond during the economic expansion, the investor would want to be compensated for the risks of inflation and increases in the short-term yield. If the 10-year rate did not compensate for these factors, the investor would prefer buying 2-year bonds multiple times over the 10-year period.

But what if our investor expects a recession? In this case, our investor’s concerns over inflation would dissipate and their expectations would shift to the Fed lowering interest rates to near zero in the short to medium terms to help grow the economy out of the recession. As a result, the investor would be willing to accept a relatively lower yield on long-term bonds today, knowing that this yield will be relatively high during the economy’s period of recovery.

In summary, an investor in long-term 10-year bonds always wants to be paid more than what they would receive by investing in short-term bonds over that 10-year period. As an economic expansion loses steam (as they always do), short-term rates continue to rise as the Fed tries to control inflation, but long-term rates stall with the expectation of near-zero short term rates in the coming future. A higher short-term rate than long-term rate results in an inverted yield curve.

As shown in the graph below, this has historically indicated a recession (shown as the light green columns) in the following 12 to 18 months.

Will the yield curve invert anytime soon? Probably not. In January 2019, the Fed cited low inflation and slowing foreign economic growth as reasons enough to end further hikes to short-term interest rates, at least for now. If the predictive power of the yield curve endures, we are unlikely to see a recession begin in 2019.

However, it is important to remember every recession is different. As structural changes within the economy occur, the potential risks also change, meaning that a recession can and probably will take a very different form next time around. It also means that whatever it is that pushes the economy over the edge, most of us won’t see it coming.