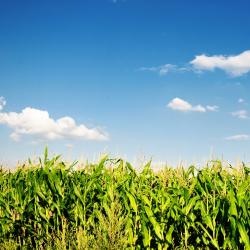 Michigan’s agricultural economy: how are we doing and what comes next?

As published in The Grand Rapids Legal News

This spring, we saw some of the worst planting weather in recent memory. Cool spring temperatures and heavy rains severely impacted not just Michigan’s farmers, but also those in Ohio, Indiana, and Illinois. Early spring rains and winter run-off created flood conditions along the Mississippi. However, the story of Michigan agriculture’s problems didn’t begin this spring. They’ve been occurring for some time now. There are four trends impacting Michigan agriculture currently: Weather, International Trade, Finance, and Consolidation.

Weather
In Michigan, the wet weather hampered farmers’ efforts to plant corn and soybeans. Current figures on actual acreage planted are not yet available from the USDA, but earlier interim reports indicated that only approximately 60% of the intended acreage of corn and soybeans were planted. Additionally, late planting, and corresponding late maturity, makes the danger of an early frost more significant. Should winter come early, some crops may not reach full maturity before harvest which would result in a smaller (per acre) than anticipated harvest (on less acres than hoped).

The wet spring and delayed planting are causing this to be the smallest US grain harvest forecast in the last four years.

Since the high in 2012- 2013, prices for grain have fallen significantly. Corn has fallen in nominal dollars by 50%, and in inflation adjusted dollars by 28%. Soybeans have fallen by 36% (inflation adjusted 21%). During this time, the costs of agricultural inputs have continued to rise: fertilizer, seed, herbicide. The cost of labor, insurance, taxes, and equipment continues to rise as well.

Currently, corn and soybean prices are rising. However, this is a double edged sword. While it may mean higher revenues for farmers who were able to get their fields planted, it will mean higher costs for those who use grain, especially those who use it to feed dairy, beef, swine, and poultry.

This decrease in revenue is putting enormous pressure on farm operations around the country.

In the past, the United States was the bread basket for the world. There was always a market for U.S. grain products across the world. This is no longer the case today. First, many regions in the world grow their own grain at successful prices. In South America, from 2001-02 to 2017-18, corn production has grown from 2.4 billion bushels to nearly 6 billion bushels, a 240% increase in 16 years. Additional production in Central Russia is also having an impact their current harvest is forecast to be 24% above normal this year. Additionally, more successful grain operations are growing in the Indian subcontinent as well as China.

These foreign grain producers are so successful that some large buyers are actually importing cheap South American grain into the U.S.! Smithfield Farms is estimated to be importing between 5 and 10 shiploads of Brazilian corn from ADM in 2019 alone.

Another complicating factor for U.S. farmers is the unsettled situation with respect to international trade. Currently, we are in a trade war with China, one of the U.S.’s largest agricultural trading partners. In 2017, the U.S. exported nearly $20 billion to China. Ag exports to China fell by nearly 50% to less than $10 billion in 2018. Specifically, soybean exports fell from 1.1 billion bushels in 2017 to approximately 250 million bushels in 2018. By taking their grain orders to other countries, China is creating new relationships with other producers that may extend decades into the future.

In a new escalation, following the report of an additional 10% U.S. tariff on Chinese goods, on August 6, the Wall Street Journal reported that China will suspend all imports of U.S. agricultural goods.

We are also facing an uncertain future with respect to trade with Canada and Mexico. Currently, the latest treaty replacing NAFTA, USMCA, has not been approved by any of the respective governments.

All told, we have moderate to strong trade disputes with foreign markets that made up approximately 36% of US agricultural exports in 2018. This is helping to cause a significant amount of uncertainty in agricultural markets in the U.S.

Should all trade disputes be resolved today, it will take several years to unwind some of the contracts in place which were taken up by foreign buyers who sought alternative sources of grain to avoid U.S. tariffs. Specifically, it was reported by Bloomberg that it might take more than eight years to regain the level of lost soybean exports. This is not good news for U.S. farmers.

Finance
The current financial state of U.S. farmers, as noted, is precarious due to low prices since the last high point in 2012-13. Non-real estate (working capital and equipment) debt is higher now than it was during the mid-1980’s in inflation adjusted terms. Real estate debt has also reached mid-1980’s level. Working capital is forecast to fall below 10% of gross revenue in 2019. This continues a downward trend from 25% in 2014. There has been some relief to farmers through Market Facilitation Payments (MFP). The first MFP, in response to the lack of exports to China in 2018, were in the amount of $12 billion. Additionally, farmers themselves hold insurance policies which will help to offset poor harvests (or no harvest in “prevent-plant” scenarios which have occurred this year). However, should a farmer NOT be able to plant this year due to severe weather, they will currently not be able to apply for payments under the MFP plan for 2019 (MFP 2.0 – $14 billion).

This could lead to more agricultural insolvencies and potentially bankruptcies. In 2018, there were 10 Chapter 12 filings in Michigan, 49 in Wisconsin, 7 in Ohio, 15 in Indiana, and 10 in Illinois. Wisconsin led the nation in Chapter 12 filings, primarily due to low milk prices and their high dairy concentration. We are likely to see more Chapter 12 filings in 2019 for two reasons: One, agricultural revenue trends are likely to be impacted by the current weather issues as well as the international state of trade. Secondly, a revision the Chapter 12 law is awaiting the signature of President Trump. This revision, H.R. 2336, the “Family Farmer Relief Act of 2019,” raises the ceiling on how much debt producers can have, to $10 million from the previous $4 million. While the bill is not yet law, it would become law 180 days following the signature President Trump.

Going Forward
In the future, barring an unlikely quick resolution to the current trade problems at hand,
these trends in agriculture will continue. Today, agriculture is becoming dominated by larger producers due to economies of scale, higher regulation, and lack of labor. The number of farming operations continues to fall as more and more farmers lack a viable next generation of take-over family operations. This is driving the increase in farm size in terms of acreage. The highly mechanized and technological aspects of farming increase the operational costs as well, which forces the larger size of farms – be it acreage or the number of cows in a dairy herd. The largest farm producers, account for 5% of existing farm operations (as reported by the Agricultural Economics Insight) produce 75% of the total value of agricultural products, yet only use 37% of the equipment. No matter what happens on the international front, this trend is likely to continue.

For West Michigan lawyers and their clients, care must be taken to maximize their current operations. Where crop insurance claims and MFP 2.0 supplements can be taken, they must be used to help preserve cash flow to support existing operations and debt. If a bankruptcy is likely, the expanded debt levels of the revised Chapter 12 might be helpful if an operation can hang on for 180 days after the new law is signed.

If you have clients that support the agriculture industry, it would be prudent to check in with them regarding their status. Should problems be occurring, catching them quickly can help prevent problems down the road.