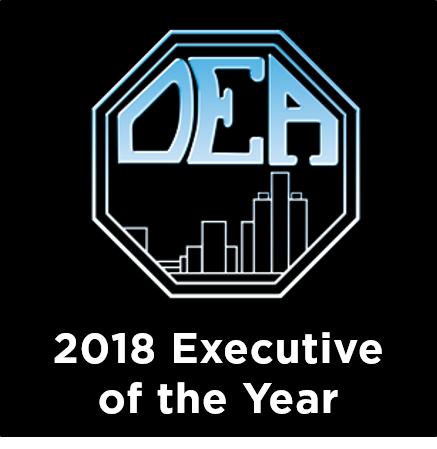 O’Keefe is proud to announce that Patrick M. O’Keefe is the recipient of The Detroit Executives Association’s 2018 Executive of the Year Award. Mr. O’Keefe was honored for his contribution to the business community at a luncheon on Thursday, November 01, 2018 at the Detroit Athletic Club.

Joe Hanson, President of the Detroit Executive Association said, “Mr. O’Keefe was chosen because he has demonstrated exceptional leadership, admirable business ethics and a proven track record for helping companies comeback strong and make a difference in their communities.”

O’Keefe joins a notable community of industry leaders who have proceeded him, including Mary Kramer, Dave Bing, Michael Bouchard, Peter Karmanos, Edsel Ford II, and Keith Crain amongst others.

The Founder and CEO of O’Keefe, he has been active as a financial consultant, crisis manager and turnaround advisor to under-performing businesses for over 30 years in a range of industries. He is an advisor to financial institutions in complex workouts and asset recovery strategies.

Mr. O’Keefe is also the CEO of Glycadia, a diabetes research company and CEO of Grow Michigan, Inc., a junior lien lender supported by the State of Michigan and sixteen financial institutions to lend money to growing businesses.

He is the past President for the Detroit Athletic Club and of the Detroit Chapter of the TMA. He is a board member for First Independence Bank Board, one of the largest minority owned Banks in the U.S. He recently served on the Advisory Council for M&A Advisor and is a member emeritus for the Michigan State University’s Department of Accounting and Information Systems, as well as a past advisory board member of the University of Detroit Turnaround Management Program, Cleary University, and Oakland University’s Finance and Accounting Department.