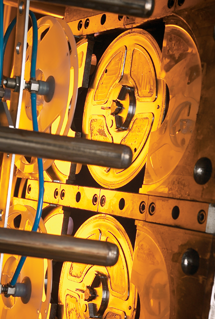 For some domestic steel buyers, it is now cheaper to purchase steel from China than from Pittsburgh.

The reason: a near-record spread between the prices for almost all kinds of steel in the U.S. and steel prices everywhere else. The widening spread, attributed to global oversupply and strong demand from car makers, has sparked a surge of imports, which are expected to reach 3.2 million tons in January, up 23% from 2.6 million tons in the same month a year earlier.

The average price difference between the U.S. and China has jumped to $159 per ton; a year ago, U.S. steel was actually $19 a ton cheaper, according to CRU, a price-analysis firm.

Howard Allen, vice president at Midland Steel Warehouse Corp., is among the U.S. buyers who are purchasing more steel from abroad as the price spread grows. Midland Steel Warehouse, based in the Bronx borough of New York City, buys steel coils and slices them into smaller pieces, cut to specifications, for construction, lighting, office furniture and other products.

A year ago, Mr. Allen relied on domestic steelmakers to supply nearly all of the 4,000 tons that Midland Steel Warehouse needed each month. Now, 30% of the company’s monthly steel purchases come from China, India and Brazil—and it is of similar quality, he says.

“After all the costs are factored in,” including shipping, “It ends up being about 10% cheaper,” Mr. Allen says.

U.S. steel prices were relatively low until last spring, when large producers such as U.S. Steel Corp., AK Steel Holding Corp. and ArcelorMittal were able to impose price increases, in large part because of strong auto-industry demand and the improving construction market. The average U.S. price for a roll of benchmark hot-rolled coil is now $678, up roughly 10% compared with a year earlier. By comparison, the current price for Chinese hot-rolled available to U.S. buyers is $540 a ton.

Meanwhile, although China moved to shut down outdated capacity, the country’s steel output rose 7.5% to a record 779 million tons, seven times more than the No. 2 steel producer, Japan. With demand in China and elsewhere slowing, “there was a real glut in the global market,” says John Packard, publisher of Steel Market Update.

That caused the spread between prices in the U.S. and important steel producers such as Brazil and Germany to start spiking in the fall, says David Lipschitz. The lower prices make the wait worthwhile, says Mr. Allen.

U.S. Steelmakers have been benefitting from the stronger domestic prices, but the increased imports are expected to drive down prices and shipments at some of the companies. U.S. Steel is expected to post narrower fourth-quarter loss of 26 cents a share Monday, compares with a loss of 35 cents a share a year earlier. AK Steel is expected to post flat fourth-quarter results Wednesday, after a loss of $1.89 a share a year earlier. Financial effects from the rising imports began to be felt this month, when steel ordered last fall started to arrive at U.S. ports.

AK Steel, U.S. Steel, and ArcelorMittal, which is scheduled to report its earnings on Feb. 7, declined to comment.

The absence of a significant steelmaker in the eastern U.S., after the closure of the Sparrows Point mill in Baltimore, also influenced Mr. Allen’s decision to buy foreign steel. The mill, which was owned by RG Steel, LLC, shut down two years ago because of high labor costs and a lack of demand on the East Coast. RG Steel is now in bankruptcy-court protection.

“There’s no major source of steel on the East Coast anymore between Baltimore and New England,” says Mr. Allen.

Steel buyers in the South and Midwest say importing steel isn’t as attractive, because they can buy it from nearby plants and avoid shipping costs.

To be sure, the U.S. lacks sufficient steel capacity, and has relied on imports for decades. The country consumes about 108 million tons a year, of which about 75% is made by foreign steelmakers and imported, Mr. Packard says. Imports can take a larger share of the marker roughly 30%, by the end of this year if the price spread remains so wide that it is cheaper to purchase foreign steel, he says.

“It’s the largest first-quarter import order I’ve seen in the last five years,” says a steel trader, who brokers steel sales between U.S. buyers and foreign sellers and whose employer doesn’t allow him to be quoted by name.

Imports are the primary reason most analysts expect steel prices in the U.S. to fall this year. Josh Spoores, who analyzes prices for CRU, says imports are expected to maintain their strength in February and March. “There’ll be a large wave of imports in the first half,” he says, adding that prices have likely peaked for the year.

Detroit is hungry for steel. U.S. auto makers are expected to sell 16 million vehicles this year, up from 10.4 million in 2009.

For steel traders in the Midwest and South, importing doesn’t hold the same allure. Tom Calhoun, president of Chicago-based Calhoun Steel Co., says it is a gamble. “Imports take time to get here, you’re not sure about quality and by the time they get here, there may be a cheaper option in the U.S.”

Mr. Allen says he would prefer that the 45-person Midland Steel Warehouse buy all of its 50,000 annual tons of steel from domestic producers. “And that will come back,” he says. “This business, it’s always a cycle.”