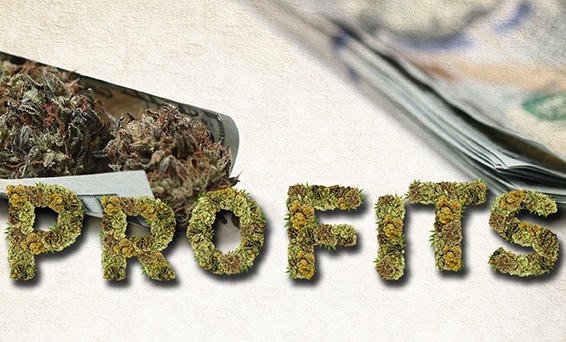 Federal Government is Puffing Marijuana Profits & Cashing Their Tax Base

The marijuana industry is experiencing profitability issues due to many factors that will no doubt also affect business in Michigan. Federal income taxes are higher for businesses in the marijuana industry due to section 280E of the U.S. Code disallowing certain business deductions and credits. Section 280E does allow “effective cost of goods sold” deduction, but includes a “proper share of allocable indirect costs.” Code sections 471 and 263A provide guidelines for allowable cost of goods sold (“COGS”) deductions, but many expenses sit in the grey area between COGS and indirect expenses that may or may not be “allocable” depending on the type of business i.e., grower, processor, or dispensary. Even if a marijuana business is able to allocate some but not all indirect expenses to COGS, the impact on the bottom line could still cause an otherwise profitable business to be unprofitable. The table below is a theoretical example of the impact of the federal tax rules under section 280E in relation to a “normally” taxed business.

So, what does this all mean?

First, if competition continues entering the market and the income tax situation is not fixed, the resulting abundant supply and price compression (as seen in Colorado) will leave most small to mid-size marijuana operations fighting for life against well-funded companies who can afford to fund losses until they grab enough market share to overcome federal income taxes in their cost structure. Second, Michigan is going to have difficulties mirroring Colorado’s marijuana tax revenues despite even the most aggressive estimates. This is mostly due to 60+ municipalities opting out (i.e.: Troy, Washington Twp., Northville, Grosse Pointe), which prevents marijuana-based businesses from setting up shop in their respective areas. Municipalities that are opting in have limitations on the number of marijuana businesses that can open within their borders at their sole discretion. Colorado, due to the same issue, has recently experienced a plateauing of tax revenues as marijuana tax collections are only projected to grow by 8% down from 27%. Colorado’s marijuana tax collections equate to a nominal 1.5% of the Colorado net tax collections as of year-end 2017. Early Michigan estimates have also validated a small impact on overall tax revenues for the State.

With the federal tax rules inhibiting business’ profitability and Michigan municipalities opting out of marijuana participation, Michigan will most likely see a minimum impact to their tax revenues similar to Colorado with all of these barriers working against the growth and prosperity of the industry.